You are here: Home / NewsMom News / In The News #ReportersNotebook / Frequent Locations – Your iPhone Is Documenting Your Every Move

Most people know that phones (and apps) know your location. You’ve probably even turned off location tracking for some of your apps under “Location Services.” But buried four menus deep is another option called “Frequent Locations.”

This is where your iPhone is keeping a running list of all the places you frequently visit, including a log of the exact minute you arrive and leave each day. The Frequent Locations algorithm even labels some of the addresses on the list with names like “home” and “work” based on the hours you spend there.

I first aired this story late last year, though the information has been out there for a while.

The topic came up today while discussing the proposed Senate Encryption Bill on our KPIX morning show and I figured it would be a good opportunity to share this story again.

The Encryption Bill, currently in draft form, would reportedly prohibit companies like Apple from creating unbreakable encryption. They would also be required to help the government access data on a computer or mobile phone.

The debate over privacy rights aside, this got me thinking about the fact that most people don’t even realize what kind of data their phones are compiling about them.

Aside from a few of my tech and investigative reporter friends (thanks for the story idea Jodi Fleischer @jodiewsb), I have not found a single person who was aware of the Frequent Locations list on their phone. 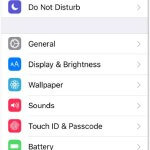 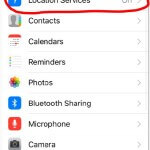 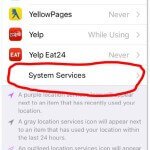 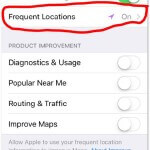 The screen shot below is from a brand new iPhone so it only has two primary locations, but you can see how detailed the information can be.

Privacy advocates point out that this information could be problematic for iPhone users if—for example—it was subpoenaed by a lawyer, tracked by an employer or accessed by a stalker. The good news, according to Apple, is that if you turn off Frequent Locations on your phone, your location history is deleted from your device.

Apple also says the data is stored only on your device—unless you opt in to help them improve maps. Then, the company says, it stores the data anonymously.

But could a Senate encryption bill change that? Might it set a precedent regarding what kind of technology or information companies like Apple would be required to keep? I suppose only time will tell.

In the mean time, you can use the step-by-step guide above to blow your friends’ minds! Ask them for their phone, check their Frequent Locations and then play the “I bet I can guess” game.

Their frequent locations may reveal everything from their home addresses to a favorite restaurant to how many hours they spent at work this week.

Parents, want to know what time your kids got home last night? Just check their phone.