The day before publishing “Concerning Chemicals in Orbit Baby and Other Car Seats”, I reached out to Orbit for a response to the Ecology Center-Duke University study.

Orbit’s website claimed its products were “Free Of Brominated Flame Retardants” and other concerning chemicals including TDCPP and TCPP. However, the Technical Report found an unidentified bromine compound and Chlorinated Tris (TCPP) in the Orbit Baby G3 convertible car seat.

UPDATE MARCH 2016:
The Ecology Center found one version of Tris in an Orbit car seat, TCPP, our independent tests of two other car seats later found another version of Tris, TDCPP

UPDATE JUNE 2016:
Orbit has alleged that our car seats tested positive for TDCPP due to external contamination. In the interest of full disclosure, we have uploaded our results and provided responses from industry experts. Click to jump to the data below.

Two forms of Tris were removed from children’s clothing in the 70’s and are now listed as carcinogens “known to cause cancer” by the state of California.

Yet six months after the Ecology Center published its report, the company had not responded to researchers and continued to claim its products were free of the chemicals.

I then discovered that individual consumers, and at least one retailer, had informed Orbit a year before the Ecology Center study that their car seats tested positive for Tris. Orbit even agreed to buy back much of the remaining stock from one concerned retailer but continued to claim the car seats did not contain Tris.

Following this post, the founder of Orbit Baby reached out to me via email. Shortly before a scheduled call, the company canceled, declined an interview and provided this statement instead:

Thank you for the opportunity to respond to your blog post. We support the work of the Ecology Center and reviewed its report in detail. Given our strict standards and testing by third party certified laboratories, we were concerned to be mentioned along with numerous other Convertible car seat manufacturers.  However, lab testing is a complicated matter in which test procedures are performed differently from lab to lab.  Individual test results are not always indicative of all products due to many factors.

Orbit Baby requires our suppliers to follow a standard that prohibits halogenated flame retardants and specifically limits or restricts more than 100 different chemicals. To ensure that we continue to provide consumers with products that meet the high level of quality and safety they expect from us, we have further expanded our own testing and protocols to include sample testing conducted by our suppliers and additional testing by independent, accredited laboratories. Our rigorous standards require not only annual testing but multiple and random testing of numerous production batches.   This means we are testing more of our products, more often.

As parents ourselves, we take these reports very seriously. We appreciate the trust that parents place in our products to ensure the safety of the most important thing in their lives – their children. We always want to live up to our customers’ expectations. We encourage consumers to contact our customer care line with questions or concerns about our products at any time.

In a follow-up email, I asked that Orbit respond specifically to the issues raised in the blog, including the fact that several consumers had their car seats independently tested and discovered that they also contained Tris.

In addition to a couple of other questions about the company’s implication that its products are endorsed by the Green Science Policy Institute (something its founder denies), I asked Orbit if it could ensure that there is no TCPP in any of the Orbits currently on the market. I also asked if the company intends to change its marketing materials in light of the fact that TCPP has been identified in its products on several occasions.

This was Orbit’s follow-up response:

We always want our customers to be happy with their Orbit Baby products and encourage them to contact our customer care line if they have questions or concerns. We have provided some refunds for our car seats on a case-by-case basis.

All testing is conducted at globally recognized, independent accredited firms, including Intertek and SGS.  Such reports are confidential because they contain proprietary product design information and other specifications. However, Orbit Baby follows many of the best practices recommended by the Ecology Center, including requiring our suppliers to follow a standard that prohibits halogenated flame retardants and specifically limits or restricts more than 100 different chemicals. To ensure that we continue to provide consumers with products that meet the high level of quality and safety they expect from us, we have further expanded our own testing and protocols to include sample testing conducted by our suppliers and additional testing by independent, accredited laboratories. Our rigorous standards not only require annual testing but also multiple and random testing of numerous production batches. This means we are testing more of our products, more often.

We want to reiterate that we follow many of the best practices recommended by the Ecology Center. As parents ourselves, we take these reports very seriously. We appreciate the trust that parents place in our products to ensure the safety of the most important thing in their lives – their children. We stand behind our rigorous testing program that ensures our car seats meet or exceed applicable governmental guidelines for chemical safety.

Later that day I noticed that Orbit had redirected this page on its site to another existing page and removed all references to the foam in its products.

In a final request for clarification, I responded with the following abbreviated list of questions:

This was the company’s final response:

We have provided all of the information that we can.

The ongoing KPIX investigation later uncovered an even more concerning version of Tris in two other Orbit car seats, TDCPP.

Months after that investigation aired, we were notified that Orbit told concerned customers that the KPIX car seats only tested positive for TDCPP due to “external contamination” by other products that may have come in contact with the car seat.

To clarify, representatives from the Chemical Industry, the Green Science Policy Institute and Duke all confirm that it would be impossible for external contamination to contribute to the levels of TDCPP found in the Orbit car seats tested.

In the interest of full disclosure, we have uploaded our results along with a few of the Orbit test results that we collected from other parents and retailers. Below you’ll find 8 test results from 6 Orbit Baby car seats submitted for testing by 5 different owners to 3 different labs.  All found % levels of TDCPP in the Orbit car seats. (Personal information has been redacted.) The car seats tested by KPIX were purchased in June and December of 2013, used for 6 months and 2 years respectively, and first sent in for testing in December of 2015.

Duke’s test results only confirm the presence of chemicals found at more than 1% by weight. However, the follow up confirmatory tests performed by Paradigm and STAT laboratories specify the exact amount of TDCPP found in each sample.

The testing was performed using one of the same testing methodologies (EPA 3550C) that Orbit is required to use per the terms of this settlement (page 2). The settlement was reached after Orbit was served with a Notice of Violation for failing to warn customers of the presence of TDCPP in its products in 2013.

The Paradigm results (PDF Pages 1-5) found 5.5% and 6.2% percent TDCPP by weight in the samples of our car seats tested.

To investigate the allegations that a sample of foam could test positive for TDCPP at 6% by weight due to after-market eternal exposure, we reached out to Duke, the Green Science Policy Institute and The American Chemistry Council.

The findings of this 2011 paper by Duke’s Heather Stapleton, published in the journal Environmental Science & Technology, indicate that, on average, when flame retardants are added during production, baby products and car seats test positive for the retardants at 4-5% by weight.  The Orbit car seats tested positive for TDCPP between 5.5-6.7% by weight indicating they contained more of the chemical than the average product tested.

“If the car seat was tested by and a laboratory found percent levels of flame retardants in the foam, that would mean flame retardants were being used in the manufacturing process. External contamination would not lead to such a finding.”

– Blum’s research was the catalyst for removing TDCPP from children’s pajamas in the 70’s.

On background, a representative from the American Chemistry Council further clarified:

“Cross-contamination can happen in the parts per million, but not at 6%… If it’s that high, then FRs could have been intentionally added to the product.” 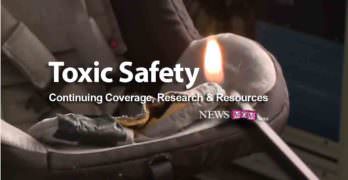 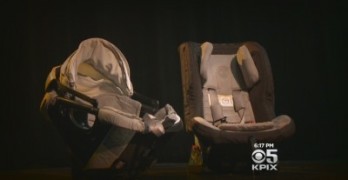 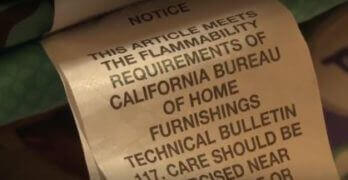 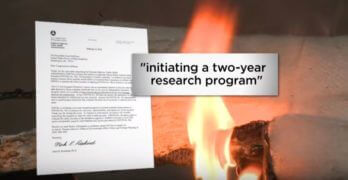 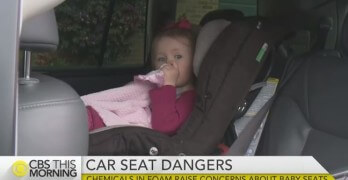