You are here: Home / Uncategorized / Rear-Facing Car Seats: Is 2 too big?

Note From the Editor: Wow. Over the past 12 hours we’ve received nearly a dozen comments from passionate and seemingly well-versed moms who hate this post. It was published nearly four months ago, so I’m assuming this is because it was shared by Safe Ride For Kids.

Keep in mind, this was simply a blog post about a story that aired elsewhere, not a fully-researched editorial like most of the others in our “Car Seat Safety” section.

The point of the story/blog was reaction to a new law. It was not intended to be an educational article or demonstrate how to install a rear-facing car seat. However, we did site stats that prove rear-facing is ALWAYS best. I’m guessing some of the commenters didn’t watch the linked TV news stories.

That said, I absolutely agree with their sentiment.

I personally interviewed dozens of moms for one of the linked TV news stories, and I only found one who was pleased with the new law. So, that’s what I reported. Murphy’s law of reporting—you always find the perfect interview subjects after the story airs.

Needless to say, I encourage anyone reading this post to read the comments below. While some are a bit mean and may have missed the point of the story, they do prove that children CAN comfortably ride rear-facing well past 2 years old. And the fact is, it is safest.

For future reference, you’ll find educational articles and research under “In-Depth Editorials” on NewsMom. This was simply a blog from our “Interesting Headlines” section, which generally doesn’t include additional independent research.

Also, I encourage anyone reading this post to check out our “Car Seat Safety” section. Specifically, “Wake The Baby” and “Concerning Chemicals in Car Seats.” If you’re opinionated when it comes to car seats, you’ll definitely want to comment on these!

Thanks for the feedback (and the passion) ladies!

California’s governor recently signed a bill (effective 2017) that will require kids to stay in rear-facing car seats until they’re 2, 40 lbs or 40 inches.

But if you’ve ever seen a 35-pound, 35-inch 18-month old sitting in a rear-facing car seat, you may understand why not everyone is thrilled.

As reported by CBS affiliates across the state, studies show that kids under 2 are 75 percent less likely to die or be severely injured in an accident if their car seat is rear-facing. (Source: 2007 study in the journal Injury Prevention)

A similar car seat law recently passed in New Jersey, and another is under consideration in Wisconsin. However, those states allow parents to turn kids around when they reach 30 lbs and 20 lbs, respectively.

California is the only state to require that a child stay in rear-facing car seats until they are 40 lbs or 40 inches tall.

However, when a taller-than-average 18-month old is crying and/or puking on a long car ride backward with her knees digging into her chest, some parents weigh the risks and benefits and turn her around early.

That will soon be illegal.

When this story was originally published, we could only find one parent who was happy about the new law. Then, months later, parents from across the country began commenting. One of them is Amber Martin, who says she is a child passenger safety expert. She shared a few photos of her super cute rear-facing kids well past the age of 2. Photographic evidence, 2 is NOT too big! 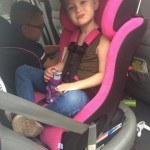 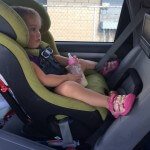 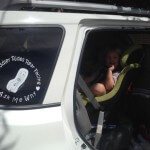 And for those parents who think 2 IS too big, Amber points out that there are a few perks you may be missing out on.

Forward facing seems to be a right of passage, but we need to retire that tradition. Think of the positive spin….. When they are rearfacing, you don’t have to share your food! And they are quieter because their voice is directed to the back! Also, they are actually MORE comfortable, with no numb legs or head slump!

We have also removed the screenshot images originally published with this blog and replaced them with images of children in properly installed rear-facing seats to avoid any confusion. What do you think? Weigh in here or on Facebook @NewsMomDotCom!

“Wake The Baby! Don’t Use Car Seats as Stroller Seats”

“Concerning Chemicals in Orbit Baby and Other Car Seats”