You are here: Home / NewsMom Features / The Lighter Side: Blogs & Reviews / Car Seats in Taxis: Difficult But Doable In the few months since I committed to stop baby wearing in taxis, my little guy officially outgrew his infant bucket car seat. I’ve opted for public transportation and avoided cabs when possible, but unfortunately that’s not always possible in a big city like Hong Kong.

In the days and weeks following my post “A Car Seat Conversion: Why I’m Changing My Taxi-With-Kids Habits,” in which I assessed the risk of catching a cab sans car seat, I struggled through countless car seat websites, car seat safety advocacy Facebook group posts and product reviews.

For international city-dwellers within booster-seat age like my older son, light, portable options like the RideSafer Vest and the new MiFold can be a godsend since these kids might otherwise be bopping around without a seatbelt in a cab, or wearing the standard car belt, which is not safe for a young child’s size and weight.

Unfortunately, no one has filled the gap for the younger set. (Ahem, attention creative inventors or development departments at car seat companies!)

Aspects of certain seats caught my eye and set me dreaming of some perfect amalgamation I would love to own. Like the IMMI Go, which is a mere 10 pounds and folds up into a compact carry bag. Or the Diono Radian RXT, with available backpack straps and a fold-up seat for more streamlined carrying (and steel and aluminum that make it essentially a roll cage).

But… IMMI Go requires top LATCH, rendering it utterly useless in many countries, where LATCH is not a thing. It is also not useable in airplanes, though it will fit in an overhead compartment. The final hitch: It only allows children to forward-face, which is not safe for kids under 2 (and many safety advocates recommend leaving them rear-facing until 4, or until they reach the rear-facing height and weight limits of the seat).

And the Radian? Well, this unyielding chunk of steel, aluminum and plastic weighs 26 pounds, and before you compare that to your backpack’s weight, remember that your backpack is likely soft with cushy straps intended for ergonomics and comfort. Not the same.

Both seats are, according to reviewers and website videos, a bit complicated and time-consuming to install, making them a bad fit for hopping in a taxi while other city-dwellers queue up impatiently behind me and the driver starts complaining into his phone’s headset in Cantonese.

Particularly since I usually also need to strap big brother in with his Ride Safer Vest.

Dear car seat developers, please make a seat that is 1) Easy to install and uninstall quickly, 2) LIGHT, as light as possible, and 3) compact, preferably foldable. Oh, and P.S., it should have an attached seatbelt locking clip (more on that later).

Thanks to the car seat techs in the Facebook group Car Seats for the Littles, I found a seat that hits two out of my three requirements: The Cosco Scenera Next.

The install and uninstall are ridiculously simple and quick, and the weight? A whopping 7.6 pounds. It’s nothing.

The price is right, too. Since it is such a bare-bones, frill-free seat, it costs less than US$50. The IMMI Go and the Radian are both in the US$200 range.

Another pro? It works like a champ on an airplane, and when installed rear-facing in economy plus on an international United flight, the seat in front of my son’s could still recline.

Two major negatives, though: It is small for a carseat, but still bulky to carry. Also, it does not have a seatbelt locking clip as part of the chair, as some fancier car seats do (like our Britax Marathon from 2012). (Note: The locking clip shouldn’t touch the plastic belt guide. Also, bright tape added on the “level line” so I could see it in dark taxis.)

In case you’re unfamiliar (as I was), a seatbelt locking clip stops a seatbelt moving, creating a safer install. In the United States, car seatbelts are required to lock when pulled all the way out. Overseas, this is not typically the case. Here in Hong Kong, the seatbelts do lock when a car stops suddenly, but you can’t pull the belt all the way out to lock it and therefore secure a car seat properly.

So, I dutifully found a locking clip someone else was no longer using, and I made it part of my get-in-the-cab routine.

But one rainy day on the ride to a well-baby visit, I got distracted by my sister’s gorgeous engagement photos on Facebook (thanks for posting that day brother-in-law!) and suddenly the cab pulled up to the curb. I fumbled for some cash, slung on one backpack strap, prepared the umbrella, removed the baby from the car seat, clicked open the seatbelt, pulled the chair off of it and tried to gracefully step out of the cab while keeping the baby dry. It wasn’t until I’d readjusted, accidentally dropping the seat on the wet sidewalk in my balancing act, that I realized the clip was long gone. I’m brainstorming ways to better secure the next locking clip (when I find one) so I can use it while still somehow leaving it attached to the car seat, making it impossible to ditch by accident.

The other issue? Toting around a car seat. Carrying the Scenera Next in the city or airport also proves a bit awkward since it does not fold up in any way, but I make it work. I use the top tether LATCH strap as a shoulder carry strap, or a way to keep it from falling off our stroller.

We have a sit-and-stand double, so I can either wedge it in the back part while my older son is on foot, or I make a “cave” for him while wearing the little guy.

Most recently, I rolled my son around like a suitcase on the sidewalks of Central Hong Kong using our GoGo Babyz Travelmate, which essentially adds wheels and a telescoping handle to any car seat. (Not pictured since I was, well, dragging a child through busy, narrow sidewalks to an appointment.)

None of these methods are perfect, but they work. Just like the chair is not perfect, but it works. And until someone creates the perfect baby chair for international taxis (assuming the taxi has seatbelts at all), awkwardness is a small price to pay.

Have you found the perfect solution, or another not-so-perfect-but-it-works option? Let us know in the comments or on Facebook! 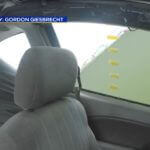 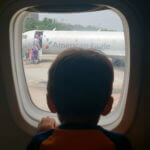